A Detour Into The Present

As we managed to hunt some curiosities this weekend for the first time in what seems like ages, it seems appropriate to take a break from this embarrassingly infrequent historical tale-telling. I had a rather thick head after Dan's zombie party, so some fresh air seemed like a tremendously good idea. I'd been mulling over the idea of a trip to Derby to visit the city's seven curiosities for a while, so this seemed like a logical plan.

Our first port of call was Derby Museum, which was quite wonderfully rubbish. I'd be surprised if anything there was new since the mid-80s, but that just added to the charm of the place. Our goal was a replica pig of lead (basically a lead ingot) which looked nothing like the picture in the book, but it was a pig of lead in Derby Museum, so it would do. 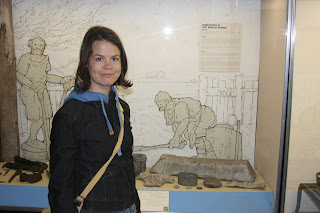 Our next target was a wrought iron font cover made by celebrity 18th century iron-wroughter Robert Bakewell and situated in St Werbergh's church. We found the church easily enough, but the door was locked and there was a for sale sign up outside. We were despondent, was this the end of our quest? We were just contemplating ringing up the estate agents and arranging a viewing (I'm sure they would have been impressed) when we noticed a small note in one of the windows saying that the museum had a key. So back to the museum we went, where we signed out the biggest key I've ever seen in my life. This gave us entry only to a small side-chapel, but it contained our font cover so we were happy. 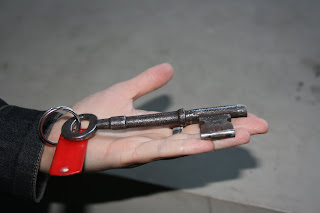 The maxi-key of win. If all keys were like this, people would need bigger keyrings 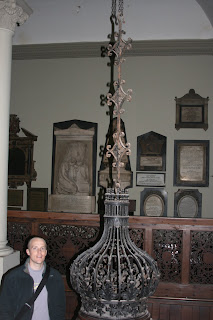 Our next curiosity was barely a stones throw away. Apparently the tower of Derby cathedral is one of the country's finest examples of the Perpendicular style (whatever that may be?) and was funded by the brewing and sale of special church tower ales throughout the region. It's quite nice anyway. 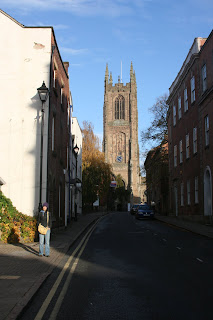 The interior of the cathedral is a pretty odd place. It has more of the feel of a stately home or a town hall than a church (religious paraphernalia excepted of course). It does, however, contain the burial place of a certain Robert Bakewell, as well as a delightful alabaster confection dedicated to Bess of Hardwick Hall. The book derides it as pretentious, particularly in view of the fact that Bess designed it herself and had it built whilst she was still alive (well she was incredibly rich after her surviving each of her 4 rich husbands). 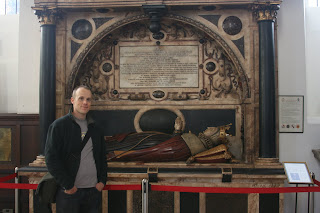 A pleasant stroll away under a busy dual carriageway lies St Mary's church. Originally built on the original bridge over the Derwent, it is now rather indelicately sandwiched between the A601 and the aged, but still ugly 1794 bridge. One of only 5 (or 6 depending on who you believe) surviving bridge chapels in England, it was here that the Padley martyrs' (of no. 59, Padley Chapel fame) dismembered bodies were impaled as a warning to other would be catholics. 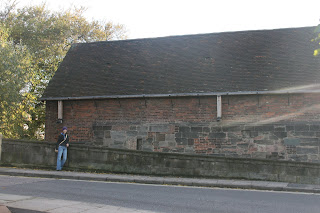 Just round the corner again (Derby town centre has an improbable curiosity density for what is on the surface a really boring concrete 60s abomination) stands a rebuilt version (after a fire in 1910) of the first silk mill in the land. Legend has it that the owner, John Lombe, stole the secrets of silk-making from the Italians and was fatally poisoned a few years later for his insolent thievery. It isn't a tremendously exciting building of itself, but it does have some nice wrought iron gates courtesy of, you guessed it, Robert Bakewell. 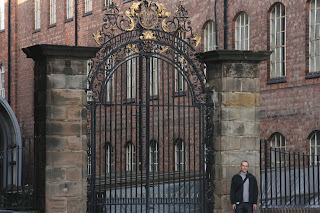 With just one curiosity in the city centre left, we ventured off in search of the arboretum, home to a headless cross. Allegedly. After a false start we managed to get into the rather pleasant wooded park, but there was a distinct lack of crosses, headless or otherwise. In desperation I sought inspiration from the great lord Google, which informed me that the cross had been relocated to Friar's Gate on the other side of the city in 1979. The curiosity book was published in 1979. Bad researching Mr Rodgers.

Suitably corrected we headed to Friar's Gate, and, next to an off licence called Plonkers, we found our crossless cross. Apparently this was its original location, where, during the plague, the locals and the farmers would exchange food for money (which was left in a bowl full of vinegar to kill any plaguey badness)(the money that is, not the food). 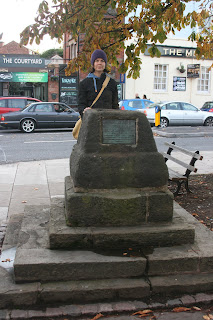 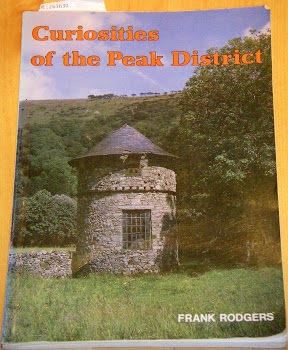